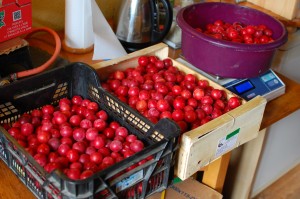 One of the fruit trees along the perimeter fence turns out to be a wild plum, producing small, round, orange/red fruits the size of a large cherry ( when the blossom erupted earlier in the spring we originally thought it was a cherry ).

Right up until the point of peak ripeness, we thought that the fruit were going to be inedible; they had a very flowery texture, and little flavour. However, following a week or so of strong sunshine, they developed both sugar content and a pleasant acidity, together with the flesh firming nicely, so we decided to pick as much as we could.

After an hour or so’s delicate manouevering of ladders and balancing precariously amongst heavily-laden branches, ‘as much as we could collect’ generated around 15kg of plums. That’s a lot of fruit to devour, even if you do love fresh plums. So, we set about researching how to conserve them.

We wanted to preserve the inherent pluminess, to avoid making an overly-sugary jam, but needed a method that would allow us to store the fruit for use during the winter, when the only seasonal fruit available tends to be apples and kiwis. Nothing wrong with that, but a little variation is welcome.

Canning seemed to be the only information that we could find. This involves storing the fruit in a sugar syrup, of a concentration of your choosing, in sterilised jars. We had reservations about this, concerns that the plum flavour might become too diluted. But what did we know ? We’d never done it before, and it seemed to be t’interweb’s preferred method, so why not try ? 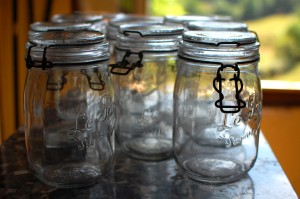 First step, find some jars in which to store the fruit. Ideally, you need something that is designed for the job. These Parfait jars are perfect, as are Kilner jars. They can be found in most decent cookware stores. We’re lucky in that a charity store in the nearest town has dozens of them available, for €0.5 each. Either conserving is a big thing around here, or they received a donation from someone who had amassed a serious collection. Regardless, a rummage around for good examples saved us some money. A scrub, followed by a soak in sterilising solution, plus a few packets of new rubber seals, and we were left with a lovely collection of as-new jars. 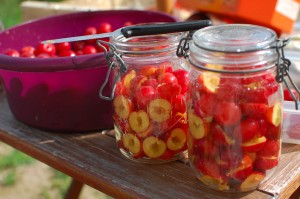 Next, prepare the fruit. Halve and de-stone the plums, place in the jars. It’s critical to select only perfect fruit, slightly under-ripe. Be ruthless : any hint of bruising or split skin, put it to one side for immediate use. 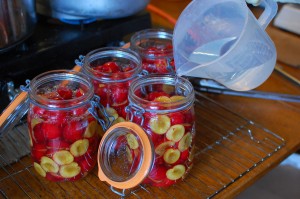 Fill the jars up to the mark ( top of the neck ) with hot sugar syrup. We used a 10% solution, something light enough to just balance the slight tartness of the fruit, and hopefully enough sugar to act as a preserving agent. 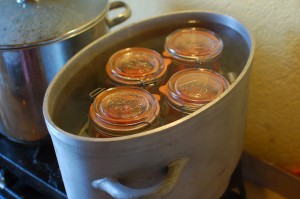 Place the jars, lids closed ( or, if using Kilner jars, loosely threaded on, not tight ) in the canner.

We found this lovely cast aluminium example in the same charity store. It’s the real deal, good thick sides, heavy duty base to properly distribute the heat, robust handles, false bottom to separate the jars from direct contact with the heat source, heavy lid to prevent too much steam escaping. Don’t know how much this sort of thing costs new, but it feels like we stumbled upon a bargain.

Anyway. Canning. Some sources suggest placing the jars in cold water, bringing the water up to around 70 degrees, maintaining that temperature for 20/30 minutes. Some suggest placing them into boiling water, continuing the boil for 20 minutes. Plus variations on those themes.

Our main concern was that we didn’t want to cook the plums to a mush. So, we opted to place them into boiling water and simmer for 15 minutes, reasoning that the fruit are fairly small, and will have been partially cooked with the addition of the sugar syrup.

If you do this ( place into boiling water ), it’s important to warm the jars first, to prevent them cracking under stress. The hot sugar syrup will help here, but we placed the filled jars in warm water to make sure.

The sprung lids of the Parfait jars allow the heated air inside to escape, creating a vacuum inside. When the time is up, carefully remove and leave to cool.

We were sufficiently concerned about this method producing watery results to not process the full 15kg in this way, deciding to try out some alternatives as an experiment. 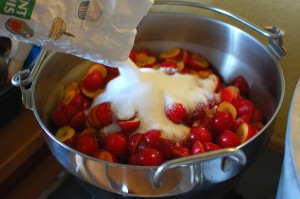 First up, instead of adding a watery sugar syrup, we cooked the plums very briefly ( 1 minute ) having added 20% sugar. 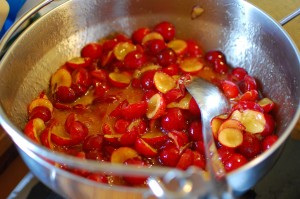 This helped break the plums down a little, releasing their juice, enabling us to load each jar with more fruit than the first method. 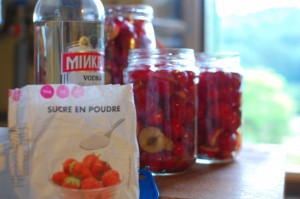 Third method : alcohol. We are near-pros at producing sloe vodka, and so felt it would be appropriate to try something similar with plums.

It’s an extremely simple method, with the benefit that you are left with two products, not just the one, as above.

For each litre of raw fruit, we added 2 tablespoons of sugar ( not as much needed as with sloes, which are extremely bitter ), half a fresh vanilla pod, and covered with the cheapest vodka we could find. You can buy an alcohol product that is marketed specifically for producing liqueurs, but it was the same price as the cheapest vodka. Pharmacies sell near-100% alcohol that you can cut with water to the desired strength, but we forgot to pop in to ask about price before heading off to the supermarket, so don’t know about price, or whether you need to produce ID or similar to buy such a thing. Something to look into for next year.

Anyway, we know vodka works, so went with that. The jars are left in a cool dark place for a few months, gently shaken at regular intervals to make sure all of the sugar dissolves. After a few months the fruit is removed, and used however you choose. An interesting, boozy breakfast maybe. Or frozen for use in desserts.

The remaining fruity booze can then be stored for a minimum of a year, to mature and be enjoyed at your leisure. The great thing about using vodka is that it can be placed into the freezer, and won’t freeze. Ice-cold sloe vodka takes on a slightly gloopy consistency, and after a few years maturing ( don’t leave it in the freezer for all this time ), is a very fine drink. 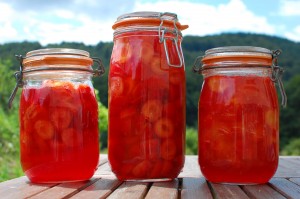 These are examples of what the three methods produced.

To the left : adding hot sugar syrup to raw fruit, simmering for 15 minutes in the canner. The raw fruit broke down a little with the heat of the syrup and cooking, leaving us with 1/3 jar of fruit. Hopefully the fruit won’t taste too watery.

In the middle : vodka and sugar added to raw fruit, no cooking ( the high alcohol content removes the need ), left to mature. Fruit retains its form.

To the right : fruit and sugar cooked together for 1 minute, simmered for 15 minutes in the canner. The fruit has broken down a little more but not to the point of mush, and the only liquid present is in the form of juice from the plums.

After a couple of months we opened a jar each of the two cooked versions. The difference was very noticeable, our preference being the version that was cooked for 1 minute, that omitted the sugar syrup. The flesh was slightly firmer, the flavour much more concentrated, rounder.

Next year, we will process the whole batch this way, filling the jars with as much fruit as possible, adding only enough juice to cover. The remaining juice can be retained and used separately.