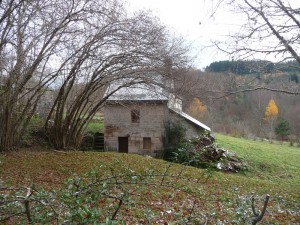 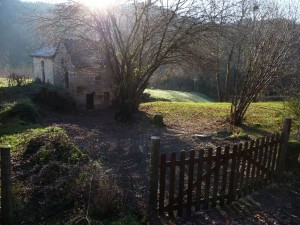 The only form of heating we have in the house are two wood burners. It’s a very small property, has no need of expensive and overly complicated central heating. It makes for a very cosy environment, but does require us to source fuel, rather than simply being able to flick a switch.

A partial answer to this requirement is to grow our own. We don’t have sufficient land to grow all of the wood we will need each winter, but we will be able to produce some of it.

Luckily, that process has already been started. There are several stools of coppiced hazel  close to the house ( the ‘stool’ is the multi-headed stump that remains after the poles have been cut ). Most of these are very old, would probably have been used to fuel the bread oven, and possibly for firewood to heat the living quarters above. The stools nearest the house had been left to grow for some years. As you can see from the photos above, they were very overgrown, were blocking light coming into the property, and had in fact broken the telephone wires one winter under the weight of the snow pushing down the branches. 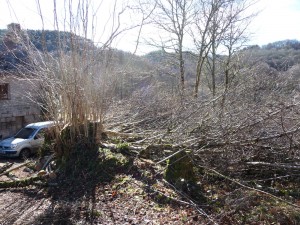 So, in order to regenerate good usable growth we first had to cut down the old growth. Coppicing needs to be carried out during the winter months before the sap starts to rise, so one cold January day we enlisted the help of a tree surgeon neighbour to cut down the bulk of the growth. The poles were densely packed, and tall. Not an easy job if you’re not familiar with a chainsaw. Actually, not an easy job if you are ( it took longer than I think the neighbour had anticipated ).

After a full day’s cutting we were left with a large area of felled wood to organise.

We were originally going to leave the remaining slender growth in place, so as to be able to cut that down in a few years. However, neighbours more knowledgable in these matters advised that everything needed to be cut right back to the stools. The remaining poles were quite spindly, already fairly tall, and these would throw shade for the new growth causing it to bolt for the light, creating very uneven, not very useful poles. So we chopped all that right back to the stools too.

Over a period of several days we worked through it, pruning the smaller branches and whispy canopies from the main trunks, sorting them into piles. 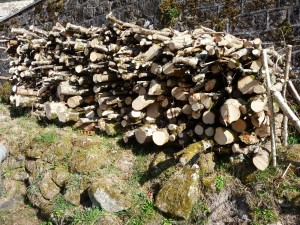 The main poles have been cut to roughly meter lengths, and stacked to dry over this summer. Some of the bigger specimens were aged between 25 and 30 years old, up to 20cm diameter. At the end of the summer we will cut them into thirds and split the larger ones, then store it all under cover for a further 12 months to dry fully ( firewood needs a moisture content of less than 20% to burn efficiently ).

We ended up with around two cubic meters of good wood. Hazel is fast burning, bright and hot, great for really getting the burners up to temperature quickly, exactly what you want when you’re regularly faced with sub zero temperatures for long periods. 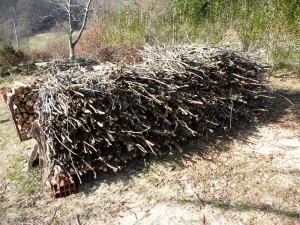 The smaller branches we stacked separately. These will be used for the post kindling, pre log stage of the fires. They will probably be dry enough at the end of the summer to be used this coming winter. Another two cubic meters. 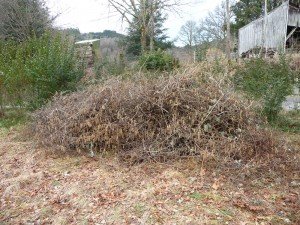 This left us with a very large amount of whispy canopy growth. What could we do with it, besides just burning it in the garden ? Having read up a little on coppicing, and having recently cleaned out the bread oven, the answer wasn’t long in arriving. We would have to turn it all into faggots, to fuel the oven. 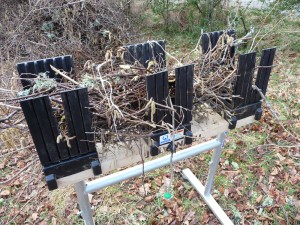 Bundling all of this without any form of assistance would have been a real pain. Thankfully, we had taken delivery of a truncator, a brilliant invention that is several steps up from the standard cross-braced logging horse. It enabled us to gather the twigs into meter lengths and tie them tightly for stacking. Not an advertised use, but a genuinely useful one ! 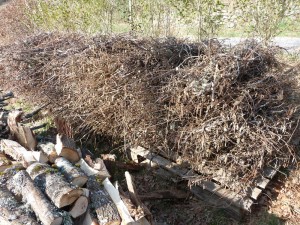 After quite a few tedious hours, we had created around four cubic meters of faggots.

Faggots have a number of uses, but one of the prime traditional uses was fuel for bread ovens. Blackthorn seems to have been the most popular for this purpose, but hazel should also do just as well. 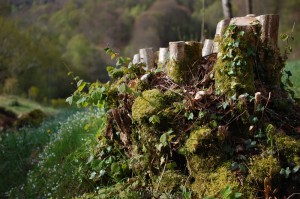 The stools that remain after this year’s coppicing are already starting to regenerate. You can see in this photograph that this stool is comprised of many previously-cut stumps.

The new growth sprouts from the cut poles and the surrounding ground, so over time these old stools can become very large. Done well, and regularly, coppicing in this way can allow trees that would otherwise lead relatively short lives to live on for many decades.

It should take between seven and ten years for the new growth to be of sufficient size to cut for firewood. 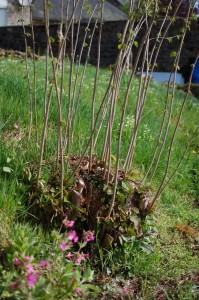 The growth on this stool is now, probably, in its second year. We thinned the poles during the winter to allow the stongest and straightest to grow into the space 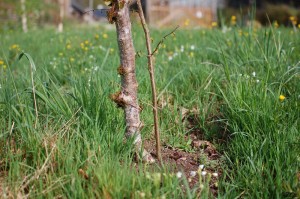 We also transplanted several shoots from older stools into empty spaces. You’ll see that the supporting post, a freshly cut pole from an older stool, is itself starting to generate growth.

Once the cycle becomes properly established, and now that we have several stools at various stages of growth, we should be able to take some wood each year for as long as we are here.

A good source of fuel for free. And the space looks much tidier ! 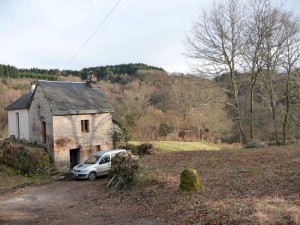