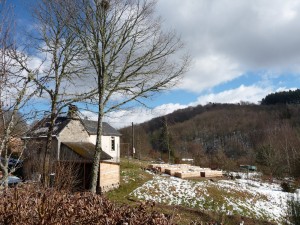 I don’t mind admitting it, this project hurt. Generally, my main form of exercise is tapping on a keyboard. Although since moving here we have spent much more time outside doing things, I cannot claim that hard physical graft is one of my preferred activities.

Because the soil is poor in these parts, we decided to build deep boxes to create a rich, fertile growing medium for the vegetables. The beds are sited on a slope, and so it was necessary to terrace the ground in order to keep the boxes level. 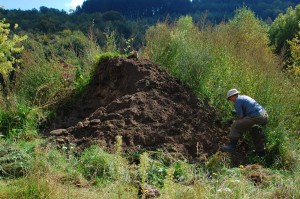 Before doing this, we had to deal with a small mountain of earth, created when the French drain was being dug. Instead of asking the contractor to spread it around with ease using their tractor, we decided to keep it, thinking that it might be useful for the veg beds. It was only some time after the contractor had left that we decided to take a closer look, and realised that in fact it was pretty useless, consisting mainly of poor, sandy earth, pulverised granite, lumps of stone.

During the months following the completion of the drainage work, the mound self-seeded with a vigorous, tough, wild spinach plant that had to be removed. 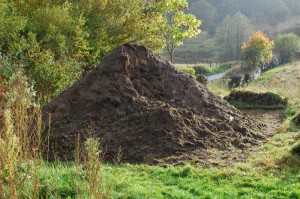 Having done that, and roughly marked out the area required, it was necessary to shift the earth elsewhere, one wheelbarrow at a time. 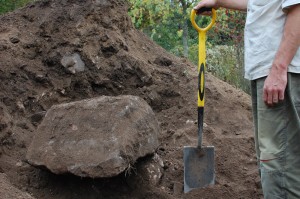 The mound of earth concealed many large lumps of very heavy rock that had been scooped out of the ground during the drainage works. I was not pleased to find them. 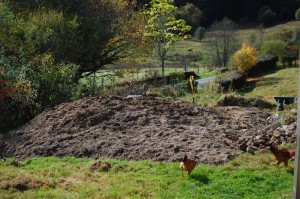 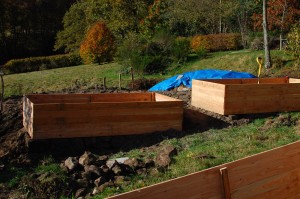 Eventually, we were able to start installing the boxes. Eight of them, 2.5mL x 1.25mW x .5mH, constructed from native Larch, a highly resinous, rot-resistant wood.

Each box needed to be dug into the  sloping ground and/or supported with large rocks at times, before being back-filled with growing medium.

This region can get pretty hot and dry during the summer, and watering this volume of earth regularly would be time-consuming and would require large amounts of water. Having researched for possible solutions, we decided to try out the Hügelkultur method. Normally, this involves building long mounds without the constraining boxes, but we wanted to maximise the growing area exposed to the sun, and so opted for this hybrid method. 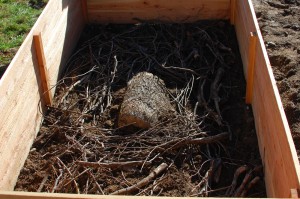 The general principal is that the beds are filled with rotten wood and other materials that, over time, create a highly fertile growing medium, rich in soil life.

The wood takes many years to break down. During this time it absorbs and retains much of the moisture that is introduced to the beds, as well as leaving air pockets within the mass, creating a well aerated soil that requires no digging. This means that, in theory, very little additional watering is required, if at all. Also, the process of decomposition helps to warm the soil, offering the potential of a slightly longer growing season.

We had several large lumps of wood lying around, already in a state of semi-decay. These went into the bottom of the beds together with rotting branches, lengths of root, hedge cuttings, etc. Following this, the beds were filled were layers of different materials, comprising … 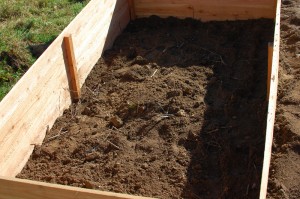 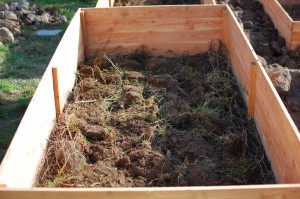 … a layer of ‘soil’ : not really the right word. This was very sandy, mostly pulverised granite, lots of stones. Good for drainage, and we figured it would slowly improve when mixed with surrounding layers.

… sods of topsoil and grass, removed when marking out the growing area. 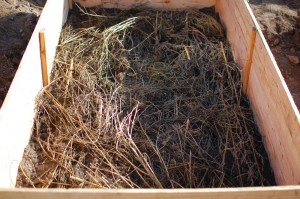 … all of the wild spinach removed from the original mound 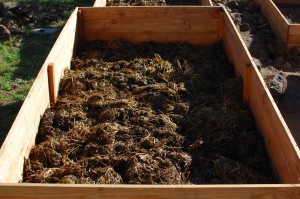 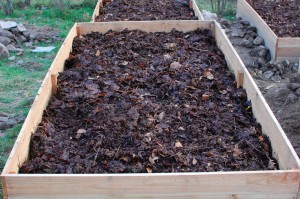 … more earth, and then a layer of 12 month old leaves 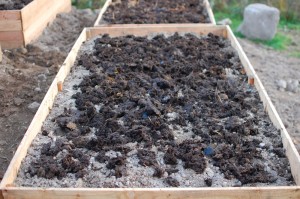 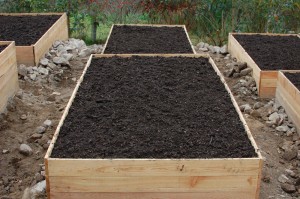 … and finally, a thick layer of barley straw to be left over winter. This helps to prevent evaporation ( wind and sun ), but also encourages the worms present in the various manures and composts to rise closer to the surface, mixing the layers as they do. 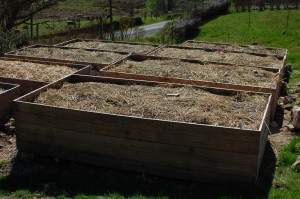 By the following spring, the contents of the beds had shrunk a little, but were still fairly level with the top of the boxes. 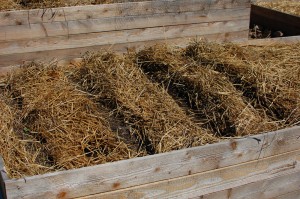 To further conserve moisture during the growing season, and to introduce more organic material into the top layer, this straw was left in place. Exposing the soil of the rows for a week before planting out helped to raise the soil temperature.

And the results ? Well, we hadn’t tried growing anything out here before using this system, and so we can’t say whether it produces a better yield ( although the yields were pretty spectacular ).

However, the summer of 2015 was spectacularly hot, for long periods, regularly in the 30°C range, and at times pushing close to 40°. Even in these conditions, it was necessary to water only once a week. That, in my book, equates to a positive result.