[ Apologies for the light in some of the photos, they were taken when we were in the midst of an epic thunderstorm ]

In advance of trying out the bread oven we decided to try to perfect the recipe of the type of bread we hope to make. We are intending to make a 100% rye sourdough bread, and also attempt a Vollkornbrot and a Pumpernickel, both of which are made with whole and chopped grains in addition to flour, the Pumpernickel being baked for a very long time at a low temperature.

The basis of good sourdough bread is a healthy sourdough culture. The culture is used in place of bakers yeast, and creates a bread that has a fuller flavour, with excellent keeping qualities. It also creates a more nutritious bread, less likely to aggravate intollerances, because the ingredients are fully fermented over a long period of time and transformed into a more readily digested food.

Making sourdough bread is a process that is spread over a longer period of time than when using fast-acting bakers yeast, but for the majority of that time, the bread is proving, doing its bread thing. The amount of time spent by the baker actually doing anything is not greatly increased.

Sourdough cultures are living entities. They need to be fed on a regular basis in order to be kept alive and in peak condition. The microorganisms within the culture are responsible for the magic that transforms a set of very basic ingredients into bread; you want to keep them happy.

There is no magic involved with keeping a culture, just flour, water, and routine. To start a sourdough culture, all you need to do is mix equal parts flour and water, leave for 24 hours, in a warmish place ( around 20 degrees ) then remove a portion, mix that portion with an equal amount of flour and water, and repeat.

After a period of a few days or so, you should notice that the culture starts to take on a slight acid tang, that it has a light ‘fizz’ on the tongue, that this mix is coming alive. Mysteriously, the microorganisms required for this process to take place just appear, apparently out of nowhere. It would appear that the microorganisms that live within a sourdough culture have never been recorded as living anywhere else but in this environment. One of those chicken and egg type quandries that would bend your brain into weird shapes if you thought about it too much. Best not to think about it too much, just enjoy the fact that this is so, and enjoy the product that materialises as a consequence.

We have been feeding our starter culture for two weeks now, and it is has reached what could be called its ‘vigourously healthy’ state, ready to start making bread. 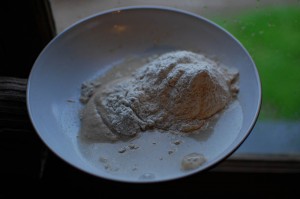 At the same time every day, we remove a third of the starter culture, keeping the discarded amount separately for use in sourdough pancakes. The remaining culture is combined with the same volume wholemeal rye flour and water ( 1oz each ). It goes without saying that the better quality the flour, the better quality the resulting culture. Wholemeal provides the full array of nutrients to the culture, encouraging a healthy and happy bunch of microorganisms. 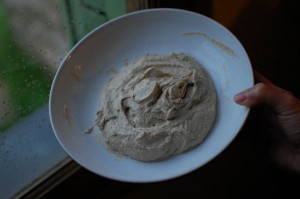 The result, after mixing, is a fairly stiff paste. This is covered with clingfilm and left for 24 hours in a warm(ish) environment. A cooler environmnent will slow the process of creating a vigourous culture. It also creates a more acid culture.

After 24 hours the paste has increased in volume and taken on a looser, moussier texture, due to the microorganisms having fed on the mixture and produced carbon dioxide as a result. 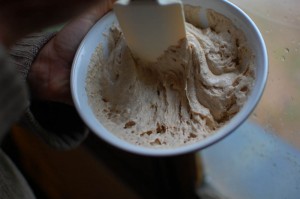 You can see here how the whole structure is full of trapped CO2 and ‘spongier’ in appearance. This is the state that is added to a bread recipe. This culture tastes alive. It has a good, slightly fruity acid tang.

A third of this mixture is removed, mixed with more flour and water, and the process repeated, continued, for as long as you wish to maintain the culture.

For detailed information about creating and maintaining a starter culture, and applying that culture to all sorts of proper bread, one of the very best places to start would be a copy of ‘Bread’, by Jeffrey Hamelman.